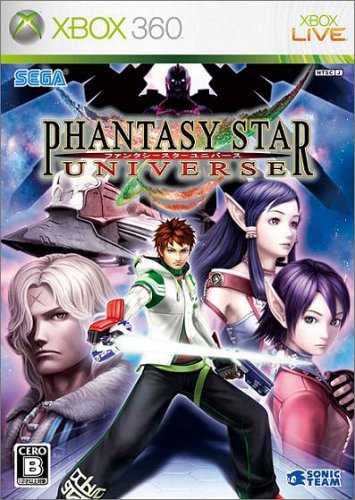 Plot Synopsis: At the start of the game, Ethan Waber, the main character, and his little sister, Lumia Waber, are at the celebration of the 100th year anniversary of the Alliance Space Fleet on the GUARDIANS Space station. The celebration is interrupted when a mysterious meteor shower almost destroys the entire fleet. During evacuation, Ethan and Lumia split off of the main evacuation route and collapsing rubble separates Lumia from Ethan.

Plot: The plot isn’t that great, in fact it’s terrible compared to most other RPGs. Ethan wasn’t that likeable a character and the rest of the cast was only so so.

Gameplay: The gameplay is just like Phantasy Star Online, with a few additions like the ability to dual wield a sword and gun. This was probably the only reason I even borrowed the game from my friend, because I remembered the good times I had with PSO and wanted to see if this was at all like it. It was, but it also wasn’t that great after having played a real MMO on a computer.

Art: The art was pretty much just like an updated version of PSO. There is nothing wrong with that however and the game looked nice.

Music: The music for the game wasn’t as good as PSO, which is a shame because the opening themes for PSO episodes 1 and 2 were amazing.

Overall: Skip this game, unless you had a case of nostalgia like me.

For those who like: Phantasy Star Online, Dead MMOs.

Not for those who don’t like: Either of the above, or a medicore plot and cast.

P.S. Sega hurry up and freaking release PSO 2 here in the west please.