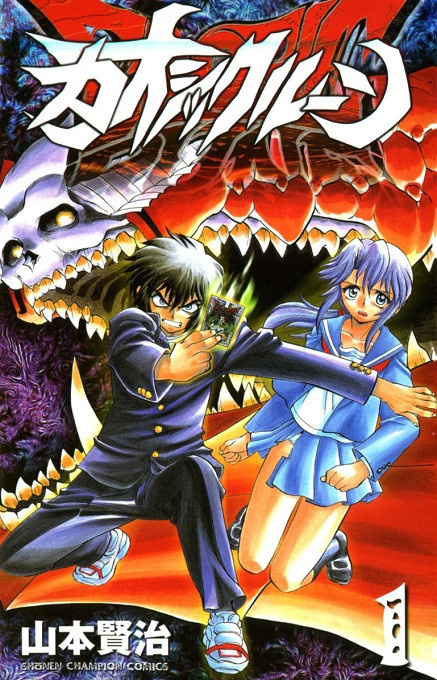 Plot Synopsis: After being the only survivor in a plane crash and losing his parents Ryouga, a young boy, is troubled by nightmares and taunted by other kids at his school. Fed up, he agrees to transfer to another school intrigued by a mysterious offer and the hope they may know why or how he was able to survive the crash. Arriving at the new school, he learns he must play a little card game with three others before being accepted.

Plot: This could easily be a series for a more mature audience considering how screwed up it is. I won’t spoil all the fun, but it’s what you’d see if you took Yu-Gi-Oh and made everything actually be a serious matter instead of being a kids game. Enjoy.

Characters: Ryouga is a ruthless jerk, but that’s what makes him the perfect lead for this series. The rest of the cast is also screwed up, but hey so is this entire series!

Art: Perfect for this series.

Overall: If you want an awesome Horror/Action series look no farther.

For those who like: Horror, Action, Drama, Awesome Plot, Screwed Up Cast of Characters, Great Artwork.

One thought on “Sensate Saturday: Chaosic Rune by Yamamoto Kenji”