This week for Video Game Tuesday I’m taking a look at some really funny bullshit coming from butthurt men who can’t seem to understand that a Video Game can be inclusive and fun at the same time. It’s all about that The Supposed Battlefield Controversy is Bull!

Huh?: So recently the vitriol breathing portion of the gaming community has been “torn” by the news that Battlefield V will include the ability to play as a “gasp” woman on the field of battle.

Disregarding the fact that this actually occurred in World War 2, the arguments used by these sore bottomed individuals that the series has been about historical accuracy is just laughable. This is the series where people have pulled a loop de loop in a fighter jet, exited the vehicle to shoot a rocket at another fighter jet and scored a kill and then re-entered the jet and flown on without a scratch. Or have three people riding a horse with one of them firing a flamethrower while it runs across the battlefield.

That’s stupid!: Agreed, honestly some people get upset at the dumbest things and defend people who actually do abhorrent and incredibly bigoted things and get away with little more than a slap on the wrist.

But but historical accuracy over political correctness: Again three people on a horse using a flamethrower. The series has never been that belivable, not to mention that just using a blowtorch on a vehicle will repair it to tip top shape?

Loot Boxes?: A term used to describe a virtual item that could be likened to a booster pack for a trading card game. However since this is a virtual item and made purely of code you can’t really trade the items gained from a Loot Box to someone else for money or other goods. You won’t see people on Ebay selling Overwatch Loot Box contents like you would with rare trading cards from something like Magic: The Gathering.

Evil?: Well recently people have been in an uproar over the stunt EA pulled with the recently released Battlefront II monetization plan which was in lieu of paying for DLC. You had to either spend ridiculously long amounts of time to unlock heroes like Luke Skywalker or Darth Vader, or spend real cash to get a chance at earning them. Frankly I hate EA, I will never ever respect them as a publisher because of the practices they use like this Loot Box debacle, or yearly game releases of series like Madden. This last one is really unnecessary, just add the new atheletes that get drafted that year into the game with DLC for god’s sake.

So EA is at fault?: Pretty much, there is a bit of blame to be laid at the feet of the developers at DICE for going along with their plan for microtransactions, but at the end of the day they are working for EA to produce a game. EA has frequently been named America’s most hated company for a reason, beating out banks and telecom companies like Comcast or Time Warner. They tend to use sleazy means to get people to spend more money on their products.

So why all the uproar?: Well for one it was a Pay to Win situation, where if you spent the money to buy the heroes you had a serious advantage against other players, or at least that is how I understand the issue. I very well may be wrong on this, however as some really cool politician (and I can’t believe I’m putting those two words together in writing) from Hawaii said, EA is playing off kid’s desire to be heroes from Star Wars in a game and milking them and their parents to gamble away their money. It’s a sleazeball practice and frankly really needs to stop. Cosmetic items like Overwatches skins in their loot boxes are one thing, but getting gameplay changes like the ones in Battlefront II is unacceptable.

What about Gacha Games?: That is a topic for another day, which I’ll cover in the very near future. However there are some differences and those are pretty important. Will those differences hold out against the weight of public sentiment? I’m as clueless as the rest of you, personally I doubt they’ll get nearly as much recognition.

That’s it for this week’s Video Game Tuesday! What are your thoughts on the topic? Leave a comment below! 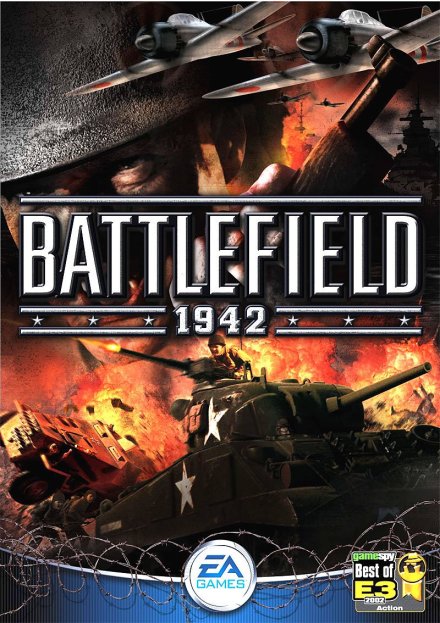 This week for Retro Game Friday I’m covering the first entry in a series that is incredibly popular now. It’s Battlefield 1942!

Gameplay: This was a pretty revolutionary game at the time, as it had a massive amount of players that could play in a single match at one time. 64 players was pretty amazing. As for the rest of the gameplay it follows the now standard Battlefield formula of capturing locations and holding the majority of them to slowly whittle away the enemies spawn tickets which let an enemy respawn upon death. 1942 also allowed players to pilot various vehicles ranging from Jeeps to bombers. This made the matches get really insane when you had all 64 players playing.

Art: The art has aged poorly, but that’s to be expect of a 3D game.

Music: I don’t remember a whit, I was having too much fun gaming with my friend online.

Overall: It’s might be worth a try if you can get a free copy, but I’m pretty sure the servers for online play are down now so it’s not really worth spending any money on this.

For those who like: FPS, Military Games, World War II, Vehicular Mayhem.

Hi everyone for this week’s Video Game Tuesday I’m going to be talking about some concerns that I’ve had after this last week playing Battlefront. It’s all about the Beta!

The Good: I was worried that vehicular controls would be stupidly complicated like they are in the Battlefield series. It’s not thankfully, in fact DICE could and should take this model into future Battlefield series. I love flying around in an X-Wing and blasting enemies out of the sky. I also enjoy the fact that the game is so freaking nice looking. Playing as the Hero was neat, although I’m disappointed in DICE using the Jedi version of Luke in the Hoth setting. I mean come on is it that hard to give a random Rebel model his face and than a blue lightsaber instead? Because the lightsaber will always give them away I don’t see the point in using that model, other than it showing that EA has once more shown their grubby nature by not paying the additional 2 hours of a single modeler and animator’s time that it’d take to implement that.

The Bad: I didn’t see any destructible environments. I know they said it’d be limited, but I imagined it’d be like the old Red Faction games where after so much geometry was changed it wouldn’t be able to be changed anymore. I haven’t seen anything. Not even snow caves in the Hoth level getting caved in, which you’d think would be an obvious possibility, as it was in Empires.

Also missing was the fact that the class system from the previous games were gone. They were incredibly useful for those who wanted to take out enemy vehicles or pilot them. Speaking of the vehicles, why the hell are they power-ups scattered around the field? I want to be able to run up to an AT-AT and take a co-pilot seat, or run through a huge space ship’s flight deck and grab an A-Wing. Making them power-ups brings several issues up. First is that when using a power-up you are vulnerable and if you get hit you’re essentially dead and you’ve just lost it. I could see if they had implemented it in order to stop people from hogging the vehicles, but they didn’t change a damn thing even with it.  Second is when “flying in” to the battle space, you are essentially a sitting duck watching a neat but pointless after the first time cutscene. It’d not be so bad if it was from a random point around the field’s perimeter, but it’s from a single point, which let me and any other halfway intelligent player camp the other side’s spawn point, and while they were watching the pretty cutscene I had brought them to a point where they had the option of dying or trying to bail, but still dying because you can just jump out of the vehicles instantly anymore.

Another huge issue is the fact that the lobbies are limited to a 20 person team in the biggest modes, which is 12 less than the previous iteration in the series, which was on the original Xbox and PlayStation 2. That was not one, but TWO console generations ago. There is no excuse why we can’t be having 40 vs 40 at this point, except that EA is once again being stingy with their money.  Even 50 vs 50 wouldn’t be unusual. Yes it’d be a massive toil on their servers, but you know I bet EA has the money to cover that from selling Madden every year. God forbid we miss a single yearly release in that pile of trash people call a game.

Overall: A few things right, but many many things going down the wrong path for this iteration to be worth yours or my money.

This week on Video Game Tuesday I’m covering the second most recent entry of a favorite series since the first one back on the PC, it’s Battlefield 3.

Plot Synopsis:  Battlefield 3‘s Campaign story is set in 2014, and covers events that occur over the span of nine months. Most of the story takes place in the Iraq/Iran region. Other locations include the Azerbaijani border; Paris, France; andNew York City, New York. Most missions occur as flashbacks on part of the interrogation of Staff Sergeant Henry Blackburn, and do not occur in order of events.

Plot: I made to the first flight mission in the campaign and than had to stop playing because the control scheme for consoles, and to be honest for PC’s as well, is convoluted as hell without a flight joystick which won’t work for anyone not playing the PC version.

Gameplay: It features the classic King of the Hill Game type where you try to dwindle the enemies store of reinforcements, read respawns, by capturing certain locations on a map and hold the majority of them while killing the other team. I really enjoy this type of gameplay and except for the flight controls, which suck like I stated above, I enjoy hopping into vehicles and using them to destroy the other team. I really wish the flight controls would have taken a hint from the Star Wars Battlefront series, or I might have actually played this game for more than 3 days. When it comes to graphics and some gameplay decisions it’s great to be life-like.Except when certain gameplay designs make it hard for a beginner player to have fun then it ruins the rest of the game.

Music: It was decent, but got old really quickly.

Art: It’s a first person shooter, you are looking at a gun most often and they looked okay, but it wasn’t anything spectacular.

Overall: A disappointing game, that should only be played by those with a masochistic streak who enjoy beating their heads against a wall when using a controller to fly planes.

For those who like: The Battlefield Series, Vehicles in their FPS games.

Not for those who don’t like: Any of the above, or shitty controls that get in the way of fun.