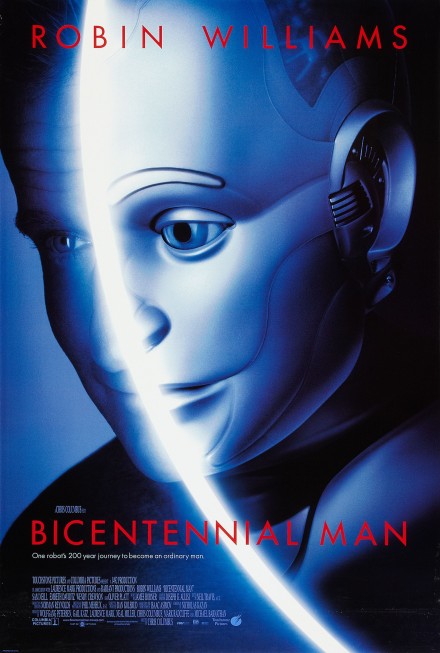 This week for Movie Monday I’m covering a movie I was taken to by my dad when I was much younger. It’s Bicentennial Man!

Plot Synopsis: The NDR series robot “Andrew” is introduced in 2005 into the Martin family home to perform housekeeping and maintenance duties…..

Plot: The plot was way over my head as a kid. I think I mostly enjoyed Robin Williams portraying Andrew. That being said it was an interesting movie and it’s story has always stuck with me throughout the years, and definitely impacted more than a few choices when I was playing games like Mass Effect or reading books like Otherlife Dreams. That said the script was pretty bad, and handled incredibly poorly.

Casting: Robin Williams plays Andrew and he does a good job, but unfortunately the script of the movie itself makes his performance one of the only bright points in the film. The rest of the cast is okay, but again the script overshadows their performances.

Special Effects: Okay, especially when you consider that Robin Williams actually wore a robot suit to portray Andrew. It was nominated for multiple awards for the special effects, but none of were winning nominations.

Music: I don’t remember the musical background of the movie at all, I was pretty young when I watched the movie.

Overall: Not a must watch by any stretch, this is probably one of Robin Williams poorer performances.

For those who like: Sci-Fi, Romance, Drama, Comedy, Robin Williams.