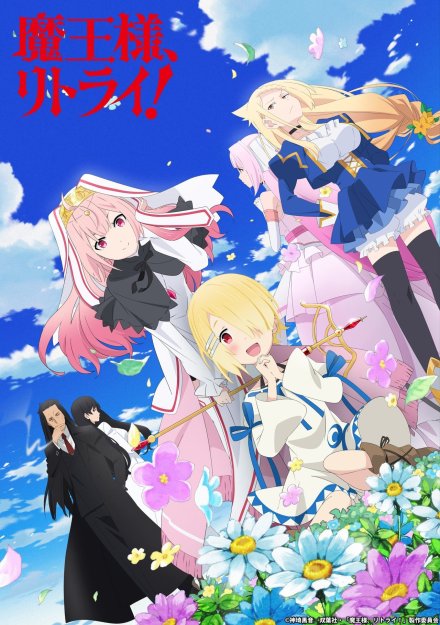 This week for Anime Sunday I’m back with another Summer 2019 series. It’s my Maou-Sama Retry Episode 01 Impressions!

Plot: The plot is okay, but not really that interesting either. Where as other series appeal to other things, either adventure, romance or comedy, this doesn’t seem to focus on any of that. Honestly this first episode seemed really bland and didn’t capture my attention at all. That’s not a good thing, as I tend to at least want to watch another episode or two, even if I don’t actually have the time to do so. I felt none of that with this series. The plot didn’t get my attention nor did the cast of characters which was incredibly small for even this first episode. In fact the plot goes almost nowhere in this first episode it seems like. I haven’t read the original Light Novel series, but I have little desire to now that I’ve seen this first episode.

Cast: Our main characters are Kunai, the main protagonist and Aku a little girl. Honestly I didn’t really enjoy Aku, and Kunai wasn’t that funny. They seemed rather bland and uninteresting compared to other main characters even though this entire episode seems to focus solely on them.

Art: The art is okay, but nothing special and nowhere near close to my gold standard of ufotable quality.

Music: The music is again okay, nothing special but not super terrible either.

Overall: Skip this series, if even I can’t be engaged by the end of the episode then I highly doubt most other people will really enjoy this series. I could be wrong and it picks up in later episodes, but first impressions do count for a lot and Maou-Sama Retry fails that spectacularly.

For those who: Fantasy, Isekai, Bland Plot and Cast of Characters.

Hey all I’m back with another new series for this week’s Anime Sunday. It’s my Tensura Episode 01 Impressions!

Plot: This first episode is pretty focused on the Mikami’s life in Modern Day Japan, and while it does get us to the first big plot point it’s taking it’s time. So those wanting a ton of action will probably be disappointed. I wasn’t one of those people however as I’m really happy they’re taking a slow pace with the series and doing the story justice. I will admit I’ve read the Light Novels this is adapted from, and seeing it take such a slow pace when compared to the frenetic pace other adaptations have done in the past is really good.

Characters: Mikami is a pretty standard dude, honestly he’s kind of boring. Thankfully the rest of the story will make up for that, and Veldora was awesome to see in the Anime. Veldora was a very fun character. We don’t get to meet much of the cast though, but since it’s just the first episode that’s okay.

Art: The art is pretty awesome, and while it’s not ufotable quality Studio 8-Bit did a pretty darn good job.

Music: The music is okay, but it’s not that intense in this first episode so who knows how the rest of the series will handle music.

Overall: An excellent adaptation, with good pacing and excellent artwork.

Plot: The plot of this first episode is very intriguing and it sets the stage for the series really well. I will say that this is an adaptation of a Light Novel Series, but I haven’t read it. I don’t tend to enjoy the romantic comedy series, but hopefully this avoids most of the faults of those Anime. This first episode shows that it could go very well, but that could end up being just a short reprieve from another poorly done romantic comedy.

Characters: Mai and Sakuta are our main characters and they are both very interesting. Mai isn’t a terrible person and is actually incredibly likable from the get go, if a bit surprising in her choice of garb. Sakuta on the other hand is also fairly forthright in his interests with Mai, and it’s a refreshing change of pace from other romantic comedies that always have awkward love polygons for no purpose beyond making drama.

Art: The art is okay, but nothing spectacular. It’s not egregiously bad, but it’s not amazing either.

Music: I enjoyed the musical score, and the opening theme. Not much more to be said about that.

Overall: This could prove to be a delightful series if this first episode is indicative of the rest of the series.

For those who like: Romance, Supernatural, School Life, Drama.

This week for Anime Sunday I’m back with another series from Winter 2018. It’s my Märchen Episode 01 Impressions!

Plot Synopsis: Kagimura Hazuki is a 15-year-old high school student who is painfully shy and socially inept; and as a result of this, she has no friends or even a love interest. She is very imaginative and a dedicated fan of fantasy fiction, traits which were ingrained by her mother, who died when Hazuki was still little; and whenever she is upset, she immediately finds herself a story book to immerse herself in.  One day after school, Hazuki comes across a cloaked figure and decides to follow her to an unused library…

Plot: The plot is pretty decent, although there are some detractions to the story with some fanservice that occurs. That being said I did find this series particularly interesting prior to this season’s start due to the fact that the author had died before finishing the original Light Novel series. Whether they can make a functional Anime out of an adaptation of an incomplete series remains to be seen.

Characters: Hazuki is a female lead who is fairly stereotypical, although I did find her trait of escaping into a good book particularly relatable. The rest of the cast is okay, although like I said above there is more than a bit of fanservicey parts that detract from the plot.

Art: The art is excellent with character designs done by the novel’s illustrator Kantoku, who I’ve mentioned before as being one of my favored artists in the Japanese scene. Feel free to look up their work, although fair warning that much of it is incredibly NSFW.

Music: The music is okay, but it’s nothing too memorable either.

Overall: A decent series, but the fanservice that happens really detracts from the actual story.

For those who like: Urban Fantasy, Fantasy in General, Fairy Tales, Decent Plot, Awesome Artwork. 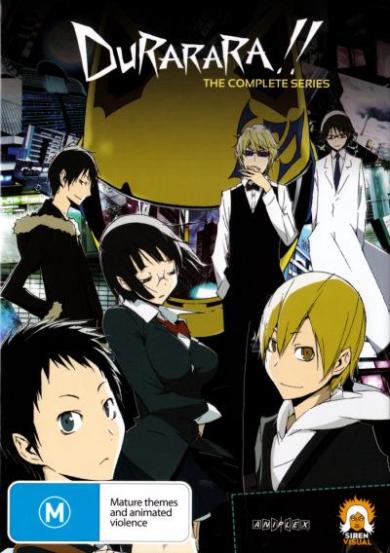 This week I’m covering Durarara!! The anime adaptation only.

Plot Synopsis: Mikado Ryūgamine, a young boy who longs for the exciting life of the big city moves to Ikebukuro to attend Raira Academy with his childhood friend Masaomi Kida, who he has not seen since he was young. After the two meet at the train station, they set out at night to the streets of Ikebukuro. Masaomi warns Mikado about people he doesn’t want to cross in the city, such as the violent and superhumanly strong man Shizuo Heiwajima, the information broker Izaya Orihara, and the mysterious gang known as “The Dollars.” After running into some of the side characters, Mikado sees a local legend called the “Black Rider”, who rides around Ikebukuro on a black bike that occasionally neighs like a horse, and who is rumored to have no head under her helmet. The “Black Rider” is Celty Sturluson, an Irish dullahan who is in Ikebukuro looking for her stolen head. The narrative follows all of the characters equally, showing how their lives intersect and creating a greater plot line from what each character knows about a common incident.

Plot: The plot is amazing and while it takes a few episodes to get into it’s worth waiting it out, because this is an adaptation of a Light Novel series by Ryohgo Narita who wrote Baccano as well.

Characters: Of all the characters I like Izaya and Celty and Shizuo probably the most as they are really interesting. However all of the characters are amazing and this is one of those series where it’s worth it to pay attention.

Art: The art in this series is pretty good, but it’s kind of weird dealing with all the outlines of unnamed characters.

Music: The music in this series is probably one of it’s highlights as it’s amazing.

Overall: If you like a good Urban Fantasy series, this takes it to a whole other level.

For those who like: Action, Mystery, Urban Fantasy, Amazing cast of characters, Excellent musical score.