This week for Retro Game Friday I’m back with another Mario game. It’s Mario Superstar Baseball!

Gameplay: The gameplay is pretty good, although the fact that they implemented a Mercy rule in gameplay was pretty hilarious to me at the time. It still is, but the main appeal of the game was to recruit players on the opposing team by performing certain acts to earn flags towards recruiting the player. You’d try to do that without recruiting the team’s captain at the same time, which could lead to you intentionally performing poorly, although never to the point of throwing a game since you had to win to recruit someone. If you recruited the captain you’d have to face off against the people you didn’t recruit on a team led by Bowser Jr. which was a pain in the butt from what I remember.

Art: The art was good at the time, but it’s aged poorly since it’s release. That isn’t surprising at all, but required mentioning nonetheless.

Overall: A fun game, but skippable if you weren’t really wanting to play a baseball game that had a Mario spin.

For those who like: Sports Games, Baseball, Mario Games, Good Gameplay.

This week for Retro Game Friday I’m back with another Mario game. It’s Mario Tennis 64!

Gameplay: The game was pretty fun, and the physics was actually really well done for it’s time. There were plenty of ways to trick your opponents and it got really hectic when you played with some friends. I remember trying to trick my friends by constantly switching between the different returns and them getting more than a bit pissed off about that.

Art: The art sadly has aged really poorly, but that’s to be expected when it’s an N64 game.

Overall: A fun game, but definitely not a must play. 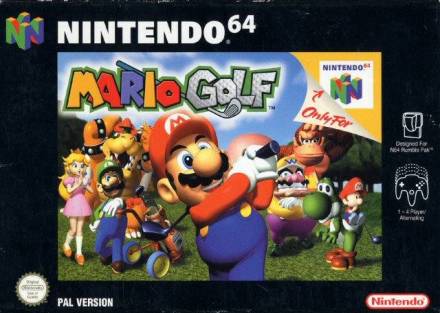 Plot Synopsis: Wait you’re expecting a plot to a game about Golf? Seriously?

Gameplay: The gameplay is pretty boring, in fact this is a pretty lame game. The game was all about hitting the “sweet spot” by tapping the A button at the correct time while aiming towards the hole. If you could do that successfully and repeatedly, the game quickly devolved into a really boring repetition of that single “mini-game”. Now that isn’t to say this was a terrible game, by all accounts it was great for multiplayer, although I never did convince my friends to play the game with me, because “Golf is boring”, so I can’t confirm or deny that.

Art: The art is quite a bit like it came out of Mario 64, which shouldn’t be a surprise to be honest. That means it’s aged incredibly poorly, and the game looks like crap now a days.

Overall: Skip this game, it’s really, really not worth going out of your way to even bother playing it.

For those who like: Golf, Sports, Mario, Repetitive Minigames.

Plot Synopsis: Mario sets out for Isle Delfino for a vacation with Princess Peach, and her long-time steward Toadsworth. Upon a rough plane landing at the island’s airstrip, they find that the once-pristine island has been polluted and plastered with graffiti. As a result of this pollution, sun-shaped objects called “Shine Sprites”, the island’s sources of power, have disappeared, and the island is covered in a perpetual shadow. The culprit seen spreading the graffiti is disguised as Mario, who is named “Shadow Mario”. To help with cleaning the airstrip, Mario finds FLUDD, a powerful water cannon which is toted like a backpack and is also created by Professor E. Gadd. After Mario defeats a giant slime covered Piranha Plant and restores the airstrip, he is promptly arrested by two Pianta police officers who accuse him of vandalizing Isle Delfino with graffiti, despite the fact that he has only just arrived. He is put on trial, however it turns out to be a mere kangaroo court where the judge immediately finds Mario guilty and orders him to clean up the graffiti and recover the Shine Sprites, in spite of Princess Peach’s objection to the ruling. He is forbidden from leaving the island until he does so. The next day, after spending the night in a cell, Mario begins his adventure to find a way to clear his name and locate the real criminal, while restoring tranquility and order to Isle Delfino.

Plot: The plot is okay, not great though. This isn’t a Zelda game we’re talking about after all.

Gameplay: The gameplay was quite good, taking the gameplay from Super Mario 64 and adding the FLUDD. It was quite fun, and while it lacked some of the classic feel of 64 it more than made up for it with the amazing stages, I liked the tropical feeling of the levels quite a bit more than the ones in 64. Also you got to use Yoshi in the various levels, which was fun too.

Art: The art is pretty great, although it has aged.

Music: The music was awesome, while it still was classic Mario it definitely had a real tropical feel.

For those who like: Platformers, Mario Games, Tropical Settings, Great Art.

Gameplay: We all know that there’s no plot to a racing game, excepting of course my favorite racing game of all time DKR, but that’s not why people play Mario Kart. They play it to screw with their friends by hitting them with Blue Shells. The real interesting thing that sets Double Dash apart from every other Mario Kart is the fact that every racer is manned by two characters, both of which are playable if desired. This could lead to some really interesting fun by allowing a couple of friends to team up to wreck havoc on their other friends, or each other if they so desired. And switching between who was driving was an essential skill for higher level play as the drifting boost from 64 wasn’t as effective if you didn’t switch between characters. This could lead to interesting races.

Art: It’s a 3D game, it didn’t age all that well, which is a pity as I love this game quite a bit.

Overall: If you’ve never played this Mario Kart, you really need to do so.

For those who like: Racing Games, Mario Kart, Multiplayer Mayhem, Great Gameplay.

Not for those who don’t like: All of the above.