Hey all for this week’s Video Game Tuesday I’m going to cover some thoughts on some of the rumors and comments I’ve heard recently. It’s all about Streaming Consoles!

Streaming Consoles: I’ve heard multiple comments and rumors saying that the next generation or the one after will be all about streaming like PS Now. Here’s why I find that concept to be utterly laughable.

Why?: Well okay there are many reasons including but not limited to the reason most people buy a console now a days, other than exclusives like Zelda games, is because it’s a one time buy that will last for years and will consistently play games with little to no maintenance on the user’s behalf. You don’t have to worry about malware mucking up your console to the point of being unusable. You don’t have to search for constant upgrades for the console, like you might with a PC either.

In addition they serve as excellent media centers for homes even when you don’t want to use the console for gaming. I rarely play a game on my PlayStation 3 anymore, but I use it all the time to watch Netflix or other things.

But that’s not a good enough reason!: You are absolutely right, however here’s the biggest and best reason I have that streaming consoles are a long, long way off. Infrastructure. Yes you read that right, Infrastructure is the main reason you won’t be seeing a streaming console any time soon by my estimates. Sure some people with delusions might think that it’s a great concept, but they forget a really simple fact. Most people have rather shitty Internet connections. Playing a game on multiplayer with a poor connection is an exercise in frustration and then you want to stream games exclusively? You want people to play a game with decent quality? You’re going to need to have them getting much better connections to the Internet than they are most likely getting. Unless you live on the coast in the US and are in a big city like Seattle or Los Angeles, you most likely don’t have that great of an internet connection.

Sure it might be okay for Netflix or the like, but that’s because the data being transferred is almost 99% one directional. If it was two directional, like it would have to be to be playing a game, most American’s would have a truly terrible gaming experience. That fact isn’t going to change anytime soon. It’s a simple fact of life that right now ISPs like Comcast or Time Warner don’t want to upgrade their systems to handle better speeds. It’s a huge expenditure that they don’t want to take on and they will fight tooth and nail to avoid giving every American citizen decent Internet. Hell even I don’t get that amazing of Internet, I get maybe 35 mb/s download speed and 10 mb/s a second upload at best where I live. There’s no way in hell that streaming a game is going to be doable with speeds like that.

This isn’t even taking into account countries like China, or European countries. I’m not fully up and up on their ISP situations, but business is business and their Comcast equivalents are going to be just as unwilling to upgrade their systems as their American counterparts. So no I see this concept being utterly stupid and ridiculous and not even profitable for Sony or Microsoft.

Hey all, so last week in a flagrant act of corruption and just being plain assholes, the FCC voted along party lines to dismantle Net Neutrality. Normally I tend to refrain from Politics in my posts, but this is such a blatant act of corruption in the United States government that I felt I had to speak up.

First off, if you haven’t read my previous post on Net Neutrality use the link above to do so. This post will wait while you read it. Back? Great.

Here’s what you can do other than riot in the streets and/or create graphic and obscene graffiti featuring Ajit Pai: Call your Members of Congress. Frankly we just had an amazing week last week with Democrat Douglas Jones winning in the historically Republican state of Alabama. The reason that’s significant, other than preventing a known sexual predator from taking public office, is that it proves that people can truly make a difference if you speak up. So raise a riot, metaphorically speaking.  I won’t advocate for an actual riot, although at this point it might be justifiable.

Other things you can do is call candidates who are running for office in 2018 and tell them you won’t vote for them if they won’t make Net Neutrality a central issue. Finally call your State Attorney General and ask for them to join other AGs in their lawsuit against the FCC for this flagrant act against the public interest.

I won’t be able to continue writing daily blog posts if this causes changes in my internet plan. So if you enjoy my work and pretty much anything on the internet, you need to be making a ruckus about this. This isn’t a joke, get out there and start banging on doors if you feel you can get others to listen to you on this. Again I won’t advocate rioting in the streets, however justified it may be. But get your voice heard and tell the FCC and Telecom Companies you won’t put up with their bullshit.

Hey all I’m interrupting your regularly scheduled Retro Game Friday with a post on Net Neutrality and why we need everyone to tell those fat old men in D.C. to shove their twisted schemes up their own rears. This post is for those in the US, but anyone else may want to read it in case their government decides this BS is okay to do.

Net Neutrality?: Net neutrality is the principle that Internet providers like Comcast & Verizon should not control what we see and do online. In 2015, startups, Internet freedom groups, and 3.7 million commenters won strong net neutrality rules from the US Federal Communication Commission (FCC). The rules prohibit Internet providers from blocking, throttling, and paid prioritization—”fast lanes” for sites that pay, and slow lanes for everyone else.

So why is this coming back now?: Well it’s been an on and off issue pretty much since the start of the internet. People like Comcast’s CEO want to make more money off a service that is deemed a public utility and want to charge more for getting access to sites and your connection speed? You think you lag bad online now? If this shit passes it’ll only get worse, and you’ll end up paying tons of money just to play your favorite games online, or read stuff like my blog posts. Hell you might even be prevented from seeing websites all together because the “government” wants to block public access for whatever reason. All of this is bad, bad news.

What can I do?: Well first go to this site, battleforthenet.com, and send a letter to Congress telling them to get off their fat bums and do their jobs properly. There’s even a convenient template letter on that site, and I highly suggest you use it. Second call your local congressional representative and jam their phones. Afterwards, tell others. Even just simply retweeting or reposting this will do.  Finally, well if this continues on I’m not going to advocate rioting in the streets, that’d be illegal. But if you should decide that you are outraged enough and decide to organize a flash mob outside your local governmental office or capital steps I wouldn’t say you were in the wrong. Feel free to get angry and loud, in fact it’s best if you do so. Please, so I can continue writing about all sorts of things, make a ruckus. I might be unable to continue writing posts like this if these jerks get their way.

Also bless you Wikipedia, you are awesome. 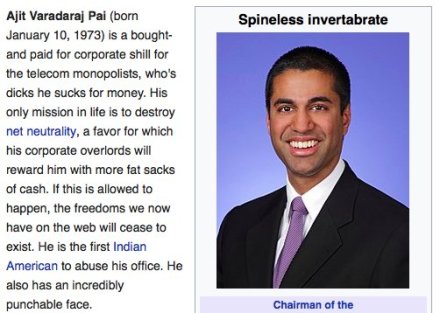